Autonomous robots (aerial, ground, surface or underwater) can perform a variety of missions with a different level of autonomy. The problem of deploying a team of robots to perform surveillance coverage missions over an unknown terrain of complex and non-convex morphology is crucial in real missions involving autonomous devices. In such a mission, the robots attempt to maximize the part of the terrain that is visible while keeping the distance between each point in the terrain and the closest team member as small as possible. As the terrain’s morphology is unknown and it can be quite complex and non-convex, standard algorithms may not be applicable or often the implementation so that they can cope with real time scenarios is difficult. To overcome this, we adopted Cognitive-based Adaptive Optimization (CAO) approach initially introduced by Prof. E. Kosmatopoulos. A fundamental property of this approach is that it shares the same convergence characteristics as those of constrained gradient-descent algorithms (which require perfect knowledge of the terrain’s morphology and optimize surveillance coverage subject to the constraints the team has to satisfy). 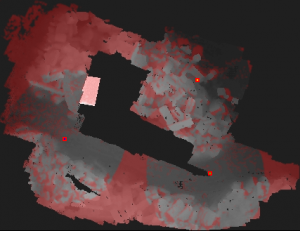 A CAO based algorithm for the case of aerial robots was developed and initially tested in simulation. The proposed approach was finally implemented using a team of real robots and its efficiency was validated in real scenarios. 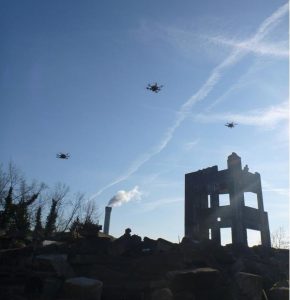